International Webinar Series on EPISTEMOLOGY OF EMBODIED KNOWLEDGE: QUESTIONS ABOUT TEXTUALIZING THE BODY

Dr.Sreenath Nair’s lecture is conducted as the first in the International Seminar Series being organized by the Department of Rural and Tribal Sociology. Conducted as a Webinar on Google meet platform on 19th November 2020, evening 6.30 pm, the event was a grand success in terms of the highly interesting, informative and interactive lecture together with a great participation of more than a hundred participants who came not only from various

departments in Kannur University but also from other eminent institutes from other parts of the country.

The event was managed by various faculties in the Department, HoD, Mr. Hareendran P, invited the resource person and presented a welcome note, Dr. Seetha Kakkoth introduced and moderated the session and Mr. Anil Gopi gave the vote-of-thanks. Mr. Arunjith KP was in-charge of the whole publicity and management of the audience in the event.

Thetopic of the lecture was “Epistemology of Embodied Knowledge: Questions about Textualizing the Body” through which Dr.Sreenath presented very successfully a detailed talk on both philosophical as well as theoretical aspects revolving around the central theme of ‘body’. As the lecturer himself mentioned, the lecture was mostly an introductory discussion on the philosophical and epistemological approaches to the concept of ‘body’ in academic discourses. The central point was ‘how epistemology or the current academic scholarship addresses body and the problems associated with it. He considers body as a valuable dimension of knowledge in humanities, a matter that had been side-lined for long by the colonial academic systems. He presented an extensive introductory review of various approaches and philosophies on body, starting from Greek philosophers. Beginning with the ideas of Socrates, he moved to Plato and Aristotle followed by other European philosophers like Descartes. In that way he mentioned about such considerations of body as, ‘body as prison-house, ‘potentially sacred body’, ‘body as a machine’ and to ‘body-mind duality -as materiality and non-material mind’ and so on.

This was followed by a discussion of the Eastern Philosophies on the same matter, which is on contrary to the European approach generally considers body and mind not as distinctive entities. Here he mentioned about the Japanese philosophy that considers ‘body as cosmos and cosmos as body’ -both created with same fundamental principles. Similarly, the Chinese and Indian philosophies, Buddhist and Hindu approaches in dealing with body and mind.

Following this, Dr.Sreenath continued with the modern European philosophical proposals of such people as E. Husserl -on how we understand the existence of material things and personalization of objects, M. Merleau-Ponty’s emphasis on the significance of body, and M. Heidegger’s emphasis on the importance of self in a post-structuralist way. During this discussion he also mentioned about artists like Picasso and their works in relation with presentation of body in them.

Further, he dealt with concepts and proposals of M. Foucault and P. Bourdieu’s habitus, bodily attitudes and reflection of social constructs on one’s body. An important part of Dr.Sreenath’s idea is the importance he gives to the proposal of Marcel Mauss who dealt with ‘bodily techniques’, body as a tool or as the first natural instrument. The emphasis in this regard was on the three aspects, viz. efficacy, survival and practical needs. He also mentioned about the ideals of Richard Shusterman on the ideas of ‘textualizing body’.

Based on all these important reviews of various proposals and ideas of a plethora of eminent scholars, Dr.Sreenath tries to explain the necessity of a new method to approach the whole ‘text’-‘body’ problem. He suggests that a new methodology is necessary which must reject all the problems and drawbacks of the present Europe-centred / colonial academic methodologies. For this, the most important aspect is the creation of an ‘indigenous methodology’ that could deal with the problem in an efficient way. This new approach of himself is elaborated by a detailed discussion by focusing on various performances, ritualistic as well as theatrical from Kerala. By looking at the kinetics, kinetic energy associated with bodily movements and gestures, the speed and temp, one can understand the whole ‘body- text’ complex -Dr.Sreenath proposes.

The crux of the whole one and half an hour presentation by Dr.Sreenath Nair may be summarized as above. The presentation was welcomed by the audience with high enthusiasm for its fundamental and thought-provoking content and it led to a lengthy discussion between the lecturer and the audience. Around 100 scholars from various disciplines attended the webinar and more than a dozen of participants posed their questions at the resource person and a highly interesting interactive session happened then, which almost went to an hour.

About the Resource Person

Dr.Sreenath Nair is a Senior Lecturer at the University of Lincoln, UK. Originally from Kerala he moved to UK for his higher studies and earned his PhD from University of Wales. In a career that spans about two decades in various universities abroad, he is one of the experts in the field of his specialization. Dr.Sreenath is a recipient of a number of prestigious fellowships and positions like the Leverhulme International Fellowship and Scholar-in- Residence at Tisch School of the Arts at New York University. He has presented his works in almost half a dozen of countries in Europe and Asia. Apart from being a lecturer at Lincoln, he holds various positions such as Editor-in-Chief of Indian Theatre Journal and Research Advisor at University of Auckland, New Zealand. One of his current works requires special mention, he is the Principal Investigator of the AHRC GCRF funded project titled Tribal Education Methodology (TEM): Sustainable Education though Heritage Performance, a project with which DRTS, Kannur University is a collaborator in the studies done in Wayanad District, Kerala. He is the author of a series of essays and books and his forthcoming book is titled as Evocative Body: Technique as Knowledge in Indian Performance. 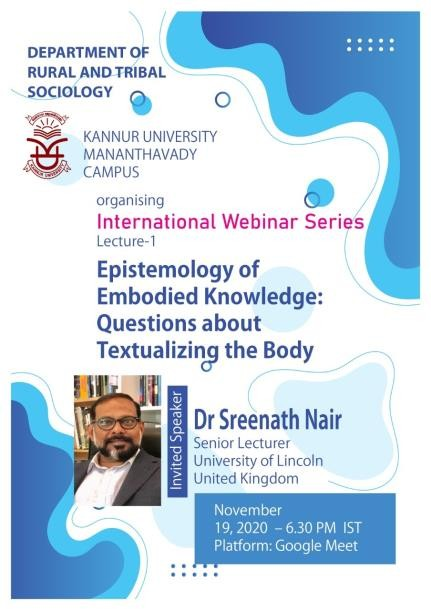 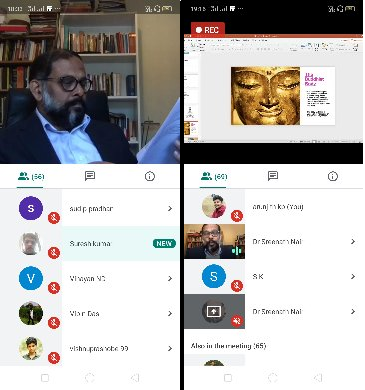